As an Amazon Associate I earn from qualifying purchases. All product links on this page are monetized.
Special Offer: Get 10 Percent Off on a DEPSTECH Borescope
Protect your data with a free trial of Backblaze Online Backup.
Backup or sync your files anywhere with GoodSync.

Styles, Features, and Capabilities of Different Types of Industrial Borescopes 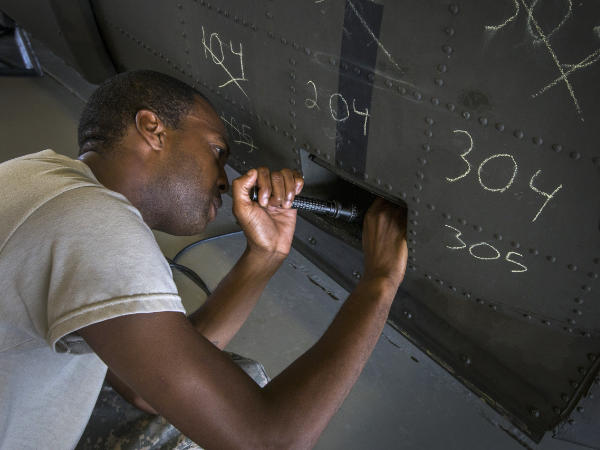 Before we discuss the different kinds of borescopes, however, let's take a moment to look at a the history of borescopes.

The first borescopes were purely optical devices that used lenses and mirrors. They enabled the inspector to see the area being inspected by peering through an eyepiece, much as one would look through a telescope. One of their earliest uses was by military artillery mechanics to inspect inside the barrels of cannons and other artillery.

The next stage in the evolution of borescopes used fiber optics to send light to the target being inspected, and to send the image back to the inspector's eyepiece. Most of these fiber optic borescopes could also be fitted with film (and later digital) cameras to take still and motion pictures of the areas being inspected. Fiber optic scopes are still used today for applications where the scope diameter must be extremely small. Fiber optic borescopes can be made with diameters as small as 0.35 millimeter (less than 1/64 of an inch).

Most borescopes sold today are purely digital devices that use LED's on the ends of the probes to provide the light, and CCD sensors to capture the images. Digital borescopes can produce pictures and videos of remarkably good quality, at a much lower cost than fiber optic scopes. Their main disadvantage is that they require a much larger diameter to accommodate the CCD image sensor and the LED lights. At the time of this writing, the smallest-diameter digital borescopes that produce decent-quality images weigh in at about 5.5 millimeters in diameter.

Now that the history lesson is over, let's take a look at some of the different types and styles of borescopes available today, along with their capabilities and typical applications.

Self-contained (or "all-in-one") borescopes can be broadly-defined as borescopes that have a screen and can be used independently, without needing to connect them to any other device. You literally can take a self-contained borescope out of its box, charge the battery, and use it. No additional devices, drivers, or software are needed.

Most self-contained borescopes record inspection images and video to removable media, most commonly a Micro SD card. Other borescopes must be connected to computing devices using a USB cable to transfer images and video, usually without needing any drivers (they're typically recognized as USB mass-storage devices, like a flash drive would be). Many borescopes can be used either way.

Most professionals prefer self-contained borescopes because they're more convenient than headless borescopes that require a phone or tablet to use as a screen. They also avoid the risk of damaging an expensive phone or tablet by using it in a harsh, cramped, dirty, or greasy environment such as the crawl space of a house or under the hood of a vehicle.

Headless borescopes can be broadly-defined as those which lack screens and must be connected to another device (generally a smartphone, tablet, or laptop) while being used, either by a USB cable or wirelessly. Most also lack any way to independently save videos other than to the host device to which they're attached.

The biggest advantage to headless borescopes is that they're much less expensive than self-contained borescopes because they don't have screens. Most of the USB ones also don't have batteries (they're powered by the host device's USB port). Headless borescopes are also popular with people who typically use another device while doing their jobs anyway, such as car mechanics who run OBD2 diagnostic software on tablets or laptops while working on cars.

Headless borescopes connect to their host devices using either USB, WiFi, or Bluetooth. Some can connect using only one of these interfaces. Others can use two or all three of them. Most (but not all) of the WiFi ones create their own access point, so an existing wireless network usually is not needed.

The disadvantages of headless borescopes are that they may require drivers and software to be installed on the host device (typically a laptop, phone, or tablet); may not work with all devices; may suddenly stop working on a given host device due to operating system updates; and require subjecting the host device to potential damage when used in cramped, dirty, hostile environments.

Rigid vs. Semi-Rigid vs. Flexible Borescopes

Semi-rigid borescopes can be used straight or can be bent to some extent, which is usually quite a bit, and hold their position pretty well while in use. They're a good choice when you have a general idea of the shape of the void being inspected, and there's no need to maneuver the device through sharp turns. Semi-rigid borescopes are by far the most popular general-use industrial endoscopes because of their versatility.

Articulating borescopes can be rigid, semi-rigid, or flexible. They have remotely movable tips that allow the user to control the direction the tip of the probe is pointed in. This not only allows the operator to control the area being viewed, but also allows a skilled operator to guide a flexible or semi-rigid borescope through internal passageways by pushing and wiggling the scope and manipulating the tip.

Special Offer: Get 10 Percent Off on DEPSTECH Borescopes

Are you in business? Learn the advantages of opening an Amazon Business Account.